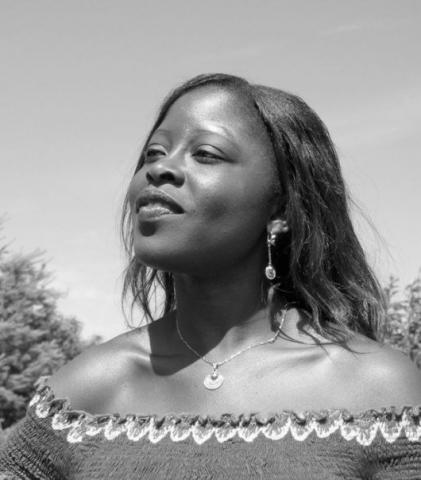 Meet ELITE is a series where we introduce you to a member of the ELITE Program for Black Youth Steering Council.

Dr. Sédami Gnidehou is proud to be Francophone and a scientist, but she certainly doesn’t like being called a Francophone scientist.

“I don’t think it’s fair to call us Francophone scientists, because we teach in French, but we conduct our research in both English and French,” Dr. Gnidehou tells me. “Most of my collaborators are not Francophone, and you know, research is not about language. Research is about a research team and a research topic.”

Dr. Gnidehou’s statement would be hard to refute under any circumstances, but it’s especially compelling when you consider the breadth of her research experience.

Born in Benin, Dr. Gnidehou first left her home in West Africa to attend university in France. Her research would eventually take her all over the world, stopping in countries like France, Denmark, Sweden, Kenya, and Colombia, before joining Campus Saint-Jean’s Department of Biology as an assistant professor.

And what does she research? The pathogenesis, i.e. development, of malaria in pregnant women, as well as the management of imported malaria here in Canada. It’s a global topic befitting of her global résumé, and it’s certainly not a scientific career that could be encompassed by a single identifier.

That said, Dr. Gnidehou hasn't always seamlessly existed at the intersection of so many different cultures. In fact, she remembers often feeling stuck during her early days as a researcher.

“It was so difficult being a Black PhD student in France,” Dr. Gnidehou says. “In my time, it was difficult to get a scholarship or a grant or anything like that.”

“I remember trying to get a position at a research institute, and someone told me that I should go back to my country because, according to him, I wasn't eligible to apply for the position. But I thought to myself, ‘I’m a citizen here, so I can't understand how different I could be compared to a person who was born in the country.’”

Dr. Gnidehou describes her experience in Canada as far more positive, but she’s still aware of the importance of creating opportunities for those who might otherwise feel like outsiders. That awareness is also why she is serving as the ELITE Program for Black Youth’s Francophone Lead.

“When I got my faculty position in 2015, I noticed that we do not have many Black students in our lab,” she says. “And most of the ones that were there didn’t know that you can work in a lab at a professional level.”

Helping the ELITE Program change that reality among Black Francophone youth is what drove Dr. Gnidehou to give virtual presentations at high schools during the program’s infancy, as well as open the doors of her lab to three interns from this year’s cohort.

It’s the kind of intermediary role that Dr. Gnidehou is comfortable in, and after years spent teaching at Western Canada’s only Francophone university campus, she knows how to be a bridge rather than a bottleneck.

Like her research, Dr. Gnidehou hopes to see the ELITE Program grow into something that transcends borders. But for now, she wants to make sure that Black Francophone youth know the program is as much for them as it is for anyone else.

“I want Black Francophone youth to know about the program and to take this unique opportunity to be involved,” she says. “The ELITE Program is like a seed, and in three to five years, I want the ELITE Program to be a pan-Canadian program for Black youth.”